The Edward Mansker family was drawn to Thebes, Illinois during the development of the town and the building of the railroad bridge across the Mississippi River. 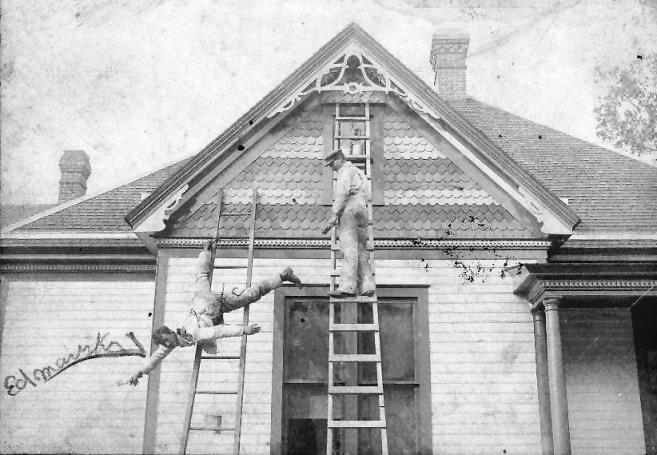 Ed married Hattie Island Pearson on 3 Apr 1902 in Randolph County, Illinois, and afterward they moved to Thebes, Illinois. Ed Mansker had learned painting from his father, Jacob Lewis Mansker, and applied his talents to building and creating signs for the various businesses, and also painting the new and old buildings in the booming town. He was also a fun, family guy. One photo shows Ed while apparently painting a building, and falling off a ladder spread-eagle fashion while looking into the camera. 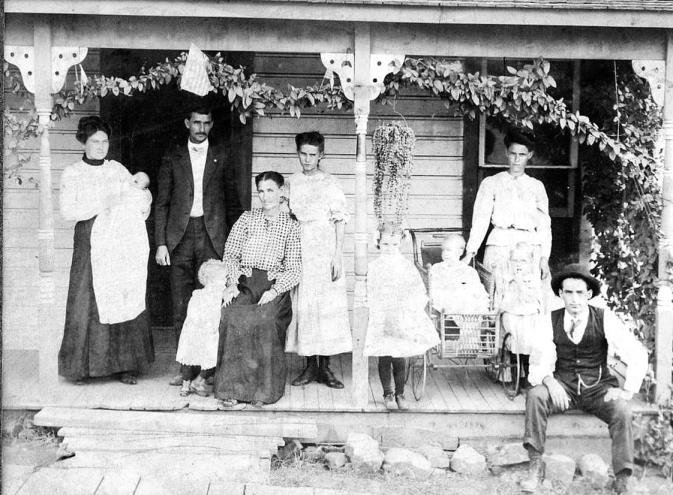 Ed and Hattie had their family in Thebes, and apparently did well. A family porch photo shows Margaret Elizabeth Bond with her son, Ed and wife Hattie, and their children Edith, and Goldie. Their first child, Chloe Fern, died before she was a year old.  Next to Ed's mom is Ora King, who was adopted when orphaned shortly after being born. The couple on the right are Margaret's daughter, May, and her husband, Claude Dean, and two of their children, Lillian and Homer. At the time of this photo, this was the complete family of Margaret Elizabeth.

Their daughter Goldie Ray married first John Ivan Wyatt, and after John's untimely death, she married Leslie "Hippo" Sullens. Goldie was a homemaker, but also worked in Thebes. John worked on maintaining the Thebes bridge and also had his own garage for repairing autos. During WWII, John also worked at the Crab Orchard Ammunitions plant, and it was on his way home from work one night that he was killed in a violent car wreck. Goldie then went to work at the Sweetwater saloon in Thebes. There she dated a man by the name of Clarence Cochran from Centerville, Washington (his mother was Maud Cochran, a friend of Hattie's). Then she met Leslie (Hippo) Sullens, a railroad engineer and fell madly in love. She and Hippo took a train to Blythesville, Arkansas to get married on 4 Sep 1945. Hippo was a train engineer for one of the railroads, and he moved Goldie and her three children, Virginia Rosamond, Betty Jo, and Johnie Coy, and Virginia's daughter, Carole Jean, to Alma, Illinois.

Ed's sister, May, married Claude William in 1899 at Charleston, Missouri, and then they lived in Thebes until after 1915. Claude was a carpenter while living at Thebes, and there was plenty of work as the town was growing strong. In 1918 they were living in Joliet and by 1920 they were living at Rock Island, Illinois. Their last child, Doris, was born in Rock Island in 1923. Claude then took his carpentry skills to Chicago, where there was plenty of work, and where they could buy their own home. By 1940, Claude was not able to work as much, and May was working 70 hours a week to pay the bills. In all, May and Claude had nine children, and all grew to adults. Their children were Lillian Naomi, Homer Lewis, James Edward, Earl Wayne, Dorothy Margaret, Lawrence Walter, Helen Marie, Donald Richard, and Doris Virginia.