Episodes from The Winning of the West

In the 1890s Theodore Roosevelt set out to write a history of the winning of the west. The result was a four-volume masterwork that contained extremely detailed descriptions, not only of the large historical forces at work, but also even the most mundane, day-to-day things that historians generally don't pay a lot of attention to.

The four volumes were later condensed down to a one-volume edition (kind of like the Reader's Digest Condensed Book of its day) entitled Episodes from the Winning of the West 1769-1807, first published in 1900. I have reproduced here four chapters from that edition. If you want to read more, I have listed in the Mansker Chronicles Bookstore two volumes of the original series in paperback editions, along with a couple of books on Daniel Boone, and The Long Hunt, a fascinating study of the decline of the buffalo east of the Mississippi.

Chapters 2 and 15 contain several references to Kasper Mansker. Interestingly enough, Theodore Roosevelt is also a distant relative of mine -- he and my mother share a Van Der Poel ancestor.

Chapter 1:   The Indians of the Border
Chapter 2:   The Backwoodsmen
Chapter 3:   Boone and the Long Hunters
Chapter 15: Robertson Founds the Cumberland Settlement 1779-1783 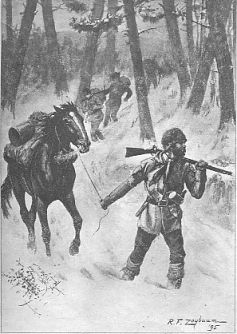