Will the Real Ludwig Mäintzger Please Stand Up?

The details of Ludwig Mäintzger's life after his arrival in Philadelphia in 1749 are fairly well documented through years of extensive research. What is not so clear, however, are the details of his life before he left Germany.

Nor, for that matter, is it clear from the records exactly how his name was spelled. The ship's passenger manifest gives it as "Mäintzger", which was allegedly taken from the signatures of the passengers themselves..

In later years he spelled his name "Minsker" (as did many of his descendants), but in his will it is spelled "Mintsker". For more versions of the spelling, see the Origin and Variations of the Family Name Page.

Some family researchers (chiefly Betty Massman of Cary, Illinois, long-time publisher of The Man from Mainz, the Mansker-Minsker family newsletter, now regrettably defunct -- see the Sources and Bibliography Page) have concluded from the available evidence that Ludwig was born in Neureut, Baden-Wurttemburg, Germany, on 8 May 1726. This date came from a German researcher, Heinrich Schmidt, who was allegedly a descendant of Jacob, a brother of Ludwig, who never left Germany.

Herr Schmidt, who lived in Karlsruhe for many years, was a professor at Heidelberg University and also taught at the University of Chicago from 1967 to 1975. He did much research into the family while he was living in the area, and it was his contention that the May 1726 date is the correct date for our Ludwig.

Unfortunately he is now deceased and no one knows what has happened to his extensive collection of documentation on the family. 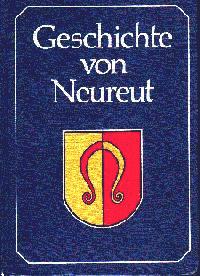 Herr Meinzer was kind enough to do some research for me in the records of the Evangelical Pfarramt, Neureut-Nord, the local Lutheran church in Neureut. His findings are outlined in the following excerpts from those records:

1726 -- Births: "May 8 is born Ludwig to his parents Maintzer the citizen and his wife Catharina." Godparents were Jacob Stribi and his wife Anna, and Georg Burghardt and his wife Barbare.

According to Herr Meinzer's reading of the records, there is a clear line extending from the birth of Ludwig in 1726 through the death of Maria in 1780. Herr Schmidt, of course, had access to the same records and did not agree with this interpretation. It was his contention that the later entries had to to with a different Ludwig, and the 1726 Ludwig is our Ludwig...

To further complicate matters, another German researcher, Friederich Wollmerhauser of Oberdischingen, who is also related somehow to the Maintzer-Meinzer etc. line, has come up with a Ludwig Meinzger/Meintziger, son of Johan Ludwig, who was born on 23 May 1706, either in Neureut or in neighboring Hagsfield. He claims that this is the correct Ludwig.

Moreover, this Ludwig married an Anna Catherine (not Maria Catherine), and had children named Dorothea (b. 1737), Maria (b. 1740), Johan Ludwig (b. & d. 1745) and Casper (b. 1746). With only one child whose name corresponds to the known children of Ludwig Mäintzger, it seems extremely unlikely that this is the correct Ludwig.

Much research on the family surname has been done all over Germany. In Saxony, Westfalen and the Rhineland it appears as Mainzer or Meintzer; they were usually Catholic and the name is quite rare in those areas. In Hesse-Darmstadt it is usually Mentzer, and in the Baden-Wurttemberg area (the location of Neureut and Karlsruhe) it nearly always is listed as Meinzer or Mainzer. It is not found in the rest of Germany at all.

However, the latest research, by Minsker descendant Michael Lacopo, points toward the village of Merchingen as the likely origin of Ludwig.