Conrad Richter And the Minsker Stories

The noted American prize-winning author Conrad Richter was, for a time, a neighbor of the Minskers in Clark's Valley, Pennsylvania. At the beginning of Richter's novel The Trees, he acknowledges his debt to, among others, John Minsker, Sr., for "help, counsel or first source material". 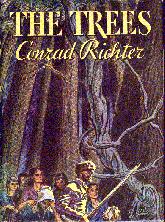 John Minsker, Sr., born in Clark's Valley, Pennsylvania, on 8 August 1867, was the son of Moses Minsker, the grandson of Ludwig Minsker III, and consequently the great-great-grandson of the immigrant Ludwig Mäintzger (see the Descendants Page).

John Minsker was prominently featured in a Richter article, " Valley from the Past", which appeared in Country Beautiful Magazine in April 1963. The article is an ode to the simple life that Richter found in Clark's Valley in the 1920s, and in it he described John Minsker's "indolent farming" as legendary in the valley. John would plant his potato crop as late as July, and dig it out a step ahead of the first big freeze in November, and his corn would often be cut that late as well, with the bunched shocks sticking up through the snow all winter. But if his farming was lacking, he made up for it in other areas. He was also legendary as a hunter, and as a weatherman. A glance at the sky would be sufficient to predict, with better accuracy than the forecasts coming out of what passed for meteorologists those days, what the weather would be like.

Richter said that John "talked copiously, anything to put off his work in the fields". It isn't hard to believe that old John filled the young writer's head with any number of family stories, Clark's Valley legends, and tall tales. In understated but obvious reverence for the old man (John was in his sixties, which must have seemed ancient to the youthful writer), Richter sums him up by saying he was "the ultimate of what folks used to call ‘good company'."

According to Minsker family legend, one of the title characters in The Grandfathers is based on John Minsker.

Conrad Richter was born on 13 October 1890 in Pine Grove, Pennsylvania, the son and grandson of preachers. He grew up in several central Pennsylvania towns, where he came into contact with any number of pioneer descendants. Their stories became the basis for much of Richter's work. One can imagine the youthful Richter, scribbling copious notes while he listened to the "tall tales"spun by John Minsker and others as he prepared to embark on his career as one of the country's preeminent chroniclers of the Early American scene.

What is arguably Richter's best-known work, The Light in the Forest, was made into a Disney movie in 1958 starring James MacArthur, Fess Parker and Carol Lynley (in her film debut). The Trees (1940) was Richter's second novel (after 1937's The Sea of Grass) and was the first volume of the Ohio Trilogy, followed by The Fields (1946), and The Town (1950), for which Richter won the 1951 Pulitzer Prize for fiction.

The 1978 television miniseries, The Awakening Land, was based on the Ohio Trilogy. It starred Elizabeth Montgomery as Sayward Luckett and Hal Holbrook as her husband, Portius Wheeler. A strong supporting cast included Jeanette Nolan, a young Jane Seymour, and future Academy Award nominee (for Fargo) William H. Macy. Emmy nominations went to Montgomery, Holbrook, and Nolan for acting, Michael Hugo for cinematography, Fred Karlin for the musical score, and Bernard J. Small for editing. The miniseries was directed by Boris Sagal (the father of Married... With Children's Katy Sagal).

It is available in a three-disk DVD set available for purchase from Amazon.

Another movie based on a Richter book, The Sea of Grass (1947), starred Katherine Hepburn and Spencer Tracy, along with Robert Walker, Edgar Buchanan and Phyllis Thaxter.

And finally, One Desire (1955) was based on Tracy Cromwell. It featured Rock Hudson as a gambler and Anne Baxter as the woman in love with him.

Richter died in 1968, leaving a legacy of stories that lives on after him, an authentic chronicle of frontier Americana. The Trees, especially, is a rich tapestry of legend, folklore, and vernacular American speech that captures like nothing else what life must have been like on the frontier of the late 1700s. It is all the more satisfying to the Mansker-Minsker reader to know that part of our family heritage is wrapped up in this tale of pioneer American life.

(Be sure to check out the Early Americana: A Tribute to Conrad Richter page; you will find a link to it on The Mansker Chronicles Links Page.)

The Mountain on the Desert: A Philosophical Journey, 1955

Writing to Survive: The Private Notebooks of Conrad Richter, 1988